We’ve just completed installing our customized OLPC software build on 3737 XOs in Paraguay, in less than 3 days, in stupendous 37°C heat. Our secret? Tereré. And NANDblaster (for which we have coined the new Spanish verb NANDblastear). 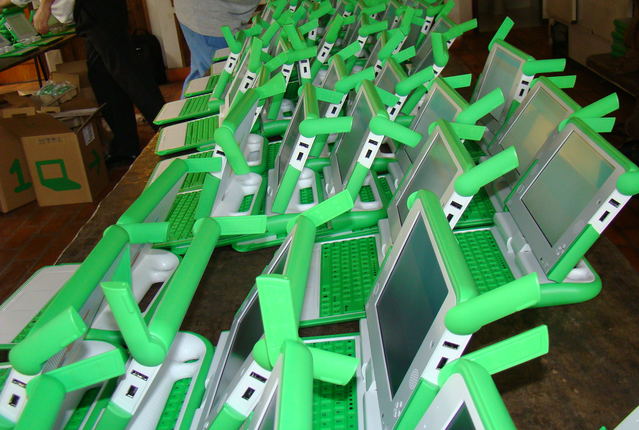 NANDblaster is a new OLPC technology which allows for mass-installation of software on XOs, wirelessly. The credit for the implementation goes to Mitch Bradley, David Woodhouse, and the people behind the technologies on which they build upon. The technically minded will understand the following brief explanation of the system:

One XO acts as a server, continually multicasting the software image over the mesh. The target XOs boot the NANDblaster client from the firmware and receive the image. Communication is strictly one-way; the clients start downloading at whatever point the server was at when they were booted, and they wait until they have all the data before decoding it. There is redundancy; the XOs only have to receive any 100 in 135 packets that are transmitted for each disk block, but if they don’t then they can just pick up more on the next pass. Due to the combination of multicast and one-way communcation, there is no limit (other than physical space) to how many XOs you can NANDblast and the same time, and the speed of software installation on any XO is the same regardless of whether there are 10 or 1000 other XOs being NANDblasted simultaneously. Rather incredible!

We were joined at various points by a number of kind victims volunteers and we basically ended up with an efficient production line with 4 roles, all simple tasks which can be done by anyone:

We were also assisted by our warehousing partner, Distribución Corderilla, in moving the 750 laptop boxes to and from the blasting area, and opening the impenetrable wooden crates in which the laptops were shipped (thanks, Quanta).

Advantages aside, the implementation is not perfect, as NANDblaster causes some health-related side effects; I can’t close my eyes without seeing green laptops, and I keep hearing the XO startup sound in the shower.