In September, I was lucky enough to travel to Ethiopia to assist with the Ethiopian government efforts of providing laptops packed with educational material to schoolchildren free of charge, as part of the One Laptop per Child program.

After “what on earth were you doing in ETHIOPIA?” one of the first questions people ask during conversation is “who paid for the 5000 laptops?” 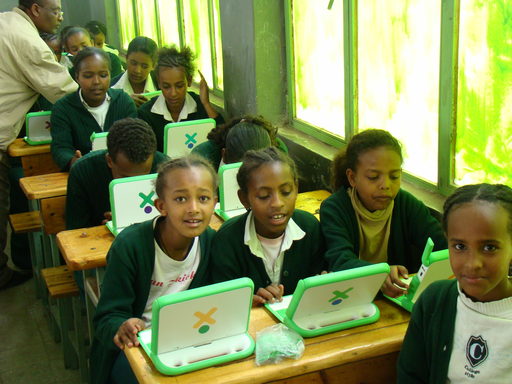 The laptops were donated by generous Americans and Canadians as part of 2007’s Give One Get One (G1G1) promotion. These donors purchased 2 laptops; one for themselves, and one for Ethiopia (or another developing country such as Afghanistan, Haiti, Mongolia or Rwanda).

When Give One Get One was initiated in November 2007, OLPC was a new idea. Production of laptops had only just started, and while laptops were being loaded onto ships to go to schoolchildren in developing nations, the early timing of the promotion meant that there weren’t really any deployments of the laptops for people to read about. Despite this, a huge number of people demonstrated their belief in the program and their donations resulted in tens of thousands of laptops headed to schoolchildren over the course of the last year.

The first day of G1G1 in 2007 was supposedly PayPal’s busiest day in history. While the huge demand resulted in some fulfilment problems, I saw with my own eyes how the donated laptops sent to other parts of the world are making huge differences in the lives of the lesser fortunate. I wrote a bit about the amazing impact of the laptops on Ethiopian schoolchildren just a few days after they had received them.

Today, OLPC has projects in over 30 countries, and has relaunched the Give One Get One promotion across the United States and Europe. To Give One and Get One, the cost is $399 for Americans or £275 for Europeans (excluding delivery).

Orders from the United States are being fulfilled immediately by Amazon.com who have a large stock of XOs. To participate, head over to laptop.org/xo.

Details of European orders are still being finalized, and you probably want to wait until we have more details on participating countries and delivery dates. However, if you’re really keen, you can pre-order at laptop.org/global. We’ll continue to update the G1G1EU wiki page and OLPC blog with any news.

There are amazing stories from OLPC deployments all over the web. Here are a few to start with:

And some excellent new media to help us spread the word:

9 thoughts on “one laptop + one child = change the world”