Last weekend, I wrote about Ethiopia’s first OLPC deployment. We’ve been back to the school several times since, so I have a few stories to share. 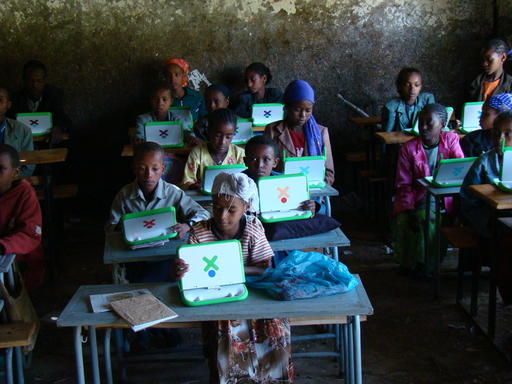 Firstly, Prof Tom Postmes and Dr Nina Hansen visited. They are starting a research project at the University of Groningen to measure the effects of the XOs on the children. On their journey to the school, they describe how they saw a child in a field, tending to his cattle. In one hand, he has a whip for controlling the animals. In the other? An XO.

Later in their journey, still before reaching the school, they find a child under a tree using his XO. Unlike all the other kids, he’s not at all excited about their presence, or them taking photos, and has no interest in seeing those photos on the camera display. He’s glued to his XO screen. They peer around to see what is draining all his attention, and they see the child looking through the Nature images bundle. This kid is fascinated by photos of the Eiffel tower, space shuttles, etc. His horizons just exploded…

The researchers were also intrigued by the way some of the children were using the Record activity. Some of these children do not have access to mirrors, and were using Record to look at themselves. Being social psychologists, Tom and Nina were excited about the changes this will have on the childrens’ self-perception and self esteem.

Back at the office, the OLPC Ethiopia team worked on creating content bundles of the regional curriculum textbooks for the school. They have acquried 39 of the textbooks (grades 2 through 8) as PDF. On Friday, we went back to the school and showed the teachers how to install them (using a customization key).

We decided to add the WikipediaEN activity along with the textbooks. In addition to a heap of textbooks, 600 kids in the middle of nowhere now have 8500 of the most popular Wikipedia articles in their hands. The children learn English from an early age, so I’m confident that it will be of use.

A journalist visited, and we took him to the school on Monday. I’ll leave it up to him to report on his findings, although I will jump in and share my favourite quote: when asked about the parents views of the laptops, the school headteacher explained how the parents view the laptops as “the rebirth of their children.” 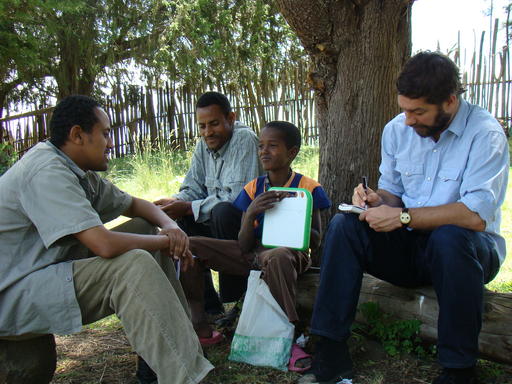 The reborn children have not yet received any tutoring about the laptops. Although they have figured out an incredible amount for themselves, they did not seem to have figured out the collaboration features. So, we gathered 15 or so children in a classroom, and showed them how to set up shared Chat, Distance and Write activities over the mesh. They were ecstatic. We told them to tell all their friends, and then we returned to Addis with high spirits.

Plans with other schools are progressing. The Ethiopian way of life is simply less organised than what I’m used to. It’s normal here for people to turn back on their plans, multiple times. Assuming plans stick (hah), I should get to see at least one more deployment.